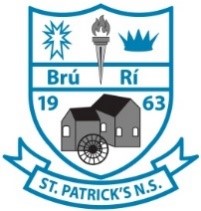 A national school opened in the village of Bruree on Monday, January 12th 1863. It was a one room structure with accommodation for 100 children. Subsequently it was extended to its present size and is now the De Valera Museum and Bruree Heritage Centre dedicated to Bruree’s most famous scholar, Eamon de Valera, the third President of Ireland. There were two other national schools in the parish around this time, Killacolla N.S. and Rockhill N.S.

Before these national schools were built, the children of Bruree went to hedge schools. In the 1830’s, the parish had seven hedge schools as well as a centre of instruction described as a ‘free school’, at Glebe House.

St. Patrick’s N.S. opened its doors for the first time in 1967, as an amalgamation of the three national schools in the parish. Since then our school has grown from strength to strength. In 1986 the school was extended, with the addition of an extra classroom, a general purpose room and staff room.

In 2016, the school was further extended to include two new classrooms, an office and staff room. At present we have a teaching staff of eleven (See staff list). We have one administrative principal, seven mainstream class teachers and three special education teachers. We also have three special needs assistants and a cleaner/caretaker. Our facilities consist of seven mainstream classrooms, two resource rooms, an office and a staff room. Our general purpose room/hall provides a venue for school celebrations, assembly and also games and P.E. lessons. We have three playground areas designated to different class groupings.

The school provides a full and balanced curriculum with a wide range of extracurricular activities. We also provide a broad range of after school activities for the pupils of the school such as after school art, speech and drama classes, dance classes as well as Gaeilic Football, hurling and camogie training.